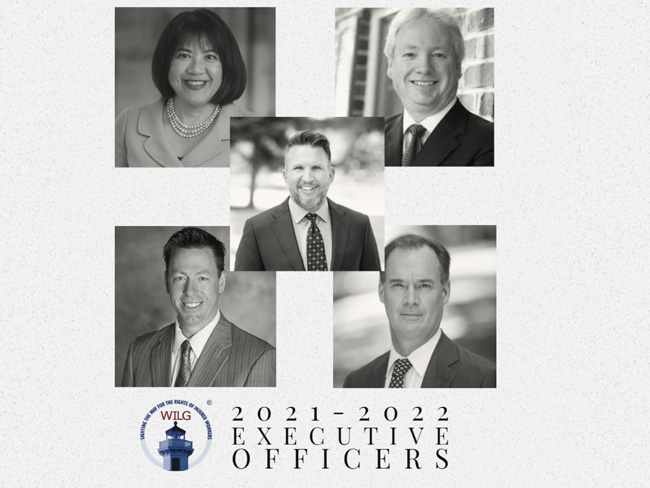 We are thrilled to announce that Roger Finderson was elected as WILG Secretary for 2021/2022!

This was announced during the 2021 WILG® Annual Convention at the President’s dinner. During the dinner, the Executive Officers took their oath of office. After being a Zoom-only event last year, this year’s convention was able to be held as a live event again.

Roger joins Catherine Surbeck of Pennsylvania as Treasurer, George Townsend of Virginia as President-Elect and Mack Babcock of Colorado as President for 2021/2022. The Executive Officers for WILG are progressive, which means that once elected, they join a leadership track that moves them up automatically each year. Therefore, Roger will be the Treasurer for 2022, the President-Elect for 2023 and the President in 2024.

Also featured at the 2021 WILG® Annual Convention President’s Dinner was a presentation by Keynote Speaker, Phil Alvarez. He spoke about the work that he’s doing as well as how he’s carrying on the legacy of his brother, Luis Alvarez, and their 9/11 Victims’ Compensation Fund.

WILG is the Workers’ Injury Law & Advocacy Group. It was founded in 1995 by a group of claimants’ attorneys. While the organization started small, it has since grown to include over 1,100 members across the nation. Included in WILG are attorneys from multi-lawyer firms, sole practitioners and paralegals.

Although the members of WILG may work separately, they share all of the information and knowledge they’ve gained with one another. This gives the community a sense of kinship and commitment to both their clients and the community as a whole.

WILG is a nationwide non-profit organization that prides itself on representing workers and their families who are injured on the job or who develop occupational illnesses due to the nature of their profession. Likewise, WILG helps those who need assistance getting the medical care and/or workers’ compensation benefits they deserve.

Roger Finderson has been a lawyer in Fort Wayne, Indiana for 30 years. His career has focused on the areas of adoptions, personal injury, Social Security and workers’ compensation.

As an undergraduate at Brandeis University, Finderson earned a degree in Computer Science while playing varsity basketball. From there, he attended Indiana University Bloomington, where he received his law degree. Roger currently lives in Auburn, Indiana with his wife and 3 children.

For injured workers in the Fort Wayne, Indiana area, there’s no better Indiana workers’ compensation attorney to have on your side than Roger Finderson.

If you or a loved one has been hurt at work or developed an occupational illness, contact Finderson Law today. One of our knowledgeable attorneys can take a look at your cases and start the process of getting you the compensation you need.